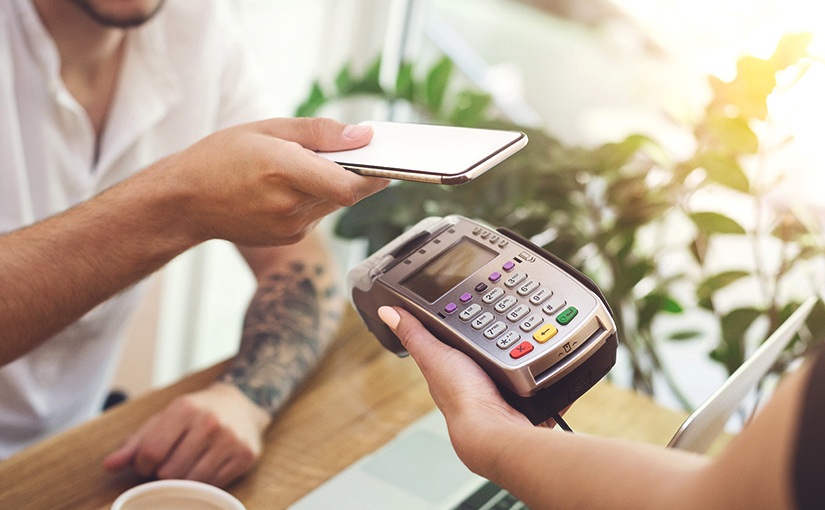 Cash has always been the king, but consumers have grown weary of digging in their pockets for spare change for fare or carrying a cash horde around with them. Now that people can make an online purchase with the click of a button, they are looking for the same type of convenience when shopping at the till in a brick-and-mortar store. Having to enter a PIN invites germs, slows the process down, and makes the line move slower, all of which are frowned upon now that mobile and contactless payments have come on the scene.

Contactless payments play nicely into the social-distancing trend, and major card companies, mobile devices, digital payments providers and more are jumping in, offering more of a one-stop-shop to consumers. Perhaps not surprisingly, the transactional demand for cash notes is weakening while contactless payments are gaining momentum, according to a recent survey by the European Central Bank (ECB). The poll measured consumer sentiment early on in the pandemic and it demonstrates the shift in payment behavior that started about a year ago.

Roughly 50% of survey participants continue to use cash and credit/debit cards like before, but 40% stated that they are increasingly turning to contactless payment cards for transactions. Another 40% said that they were dipping into their pockets for cashless frequently or “somewhat” less frequently, a trend that is expected to persist even once the pandemic is in the rear-view mirror.

Contactless in a nutshell

So for those who may still not have taken the plunge into contactless, these are cards, including debit/ credit as well as devices such as smartphones or others that rely on radio frequency identification (RFID) and nearfield communication (NFC) to make secure payments.  A chip that is enabled lets the user merely tap or wave their card a few centimeters over the reader at the point-of-sale location at a brick-and-mortar business and there you have it, the transaction is completed.

These payments differ from say, mobile payments, which rely on technology such as Wi-Fi to complete a transaction and therefore the user doesn’t need to be close to a reader. Contactless is touted for its speed, as payments can be close to two times as fast as traditional payments including cash and traditional credit/debit card buys where a PIN or signature is needed to complete the transaction.

Even though the use of debit cards and contactless payments is on the rise in the euro area, a trend that has been accelerated as a result of the pandemic, cash can still be found. In fact, according to the European Central Bank, the amount of cash that is in circulation has grown nearly twofold over the past 10 years. It is also true, however, that the prevalence of cash and coins used for daily transactions in the region is on the decline.

Lifestyle also plays into it. For instance, cash is used more frequently to pay for transactions at cafes, bars and restaurants, while cash is less popular for durable goods purchases.

As of year-end 2020, more than EUR 1,4 trillion of banknotes were in circulation in the euro area, an 11% increase vs. 2019. Nonetheless, a mere 20% of that cash was directed for transactions in the region. In fact, somewhere between 30-50% of those banknotes based on value were not in the euro area at all but instead could be found in developing countries where there is a void for payment infrastructure and acceptable savings products. The balance of the banknotes is spread across European households, corporations and financial institutions. As of 2019, some 33% of households in the eurozone stored their cash at home and while the amounts were generally small, in some cases they surpassed EUR 10,000.

The trend is two-pronged and is being fueled by demand for the euro outside of the eurozone as well as Europeans socking cash under their mattress (or wherever) as a precaution and in response to the pandemic. The ECB points out that it is unclear how this cash will be directed once the health crisis is over and the lockdowns are a thing of the past. The amount of cash that is currently being kept at home since the start of the pandemic rivals the levels seen after the demise of Lehman Brothers more than a decade ago.

While most contactless cards will face a transaction limit in an attempt to thwart fraud, this is not always the case with Apple Pay transactions, depending on the jurisdiction and/or the retailer, which as described in the below U.K. section could backfire on users. According to reports, grocery stores impose no limits on tap-to-pay transactions for Apple, Google and Samsung devices.

Across Latvia, Lithuania and Estonia, the contactless limit for Apple Pay transactions is EUR 50, in which case you might have to enter a PIN number. In Australia, the limit is as high as AUD 200.

Similar to Apple Pay, the limits imposed on any Google Pay transactions aren’t entirely up to Google. That’s because there are multiple parties involved, including Google, the bank and the retail business, any of which could influence the contactless payment limit. When using Google pay, users may be able to spend over the limit but will generally be required to unlock the mobile device via a fingerprint, pattern or password to prove their identity.

In Australia, the Google Pay transaction limit is AUD 100 while the daily limit is AUD 1,200. If you’ve got Google Pay on your Android device, you can use contactless payments anywhere you see the contactless icon in the U.K., the U.S. and beyond given the NFC technology embedded in the smartphone.

VIALET, which is part of VIA SMS Group, the parent company of VIAINVEST, offers users a hassle-free and fast way to manage their money via a digital payment app. It’s known for helping users to save time and gain control of their money. But what you may not know is that VIALET also offers a contactless Mastercard. They are quite confident the contactless Mastercard will “rock your world,” as the “queen of all payment cards” can be used across more than 200 countries around the world, not to mention its attractive design. The VIALET contactless card boasts features such as:

VIALET was named one of the Latvian startups to watch this year by Sifted.

In the first quarter of 2020, Mastercard saw mobile contactless transactions double in Europe from 7% to 14%, according to its own survey. The breakdown, which adds up to more than 100% and suggests that some people use more than one method, is as such:

Mastercard believes the shift to contactless payments, which was accelerated by the pandemic, is here to stay. The survey revealed that more than 40% of Europeans saw their use of cash diminish during COVID while nearly two-thirds of those polled expect that contactless payments are now their No. 1 preference when shopping in retail stores.

Amazon Fresh shoppers in the UK are about to be introduced to a whole new type of contactless payments. The e-commerce giant has unveiled a “just walk out” food store in Ealing, giving shoppers the ability to fill their carts and walk out without having to stand in line or use the till. It qualifies as contactless and anyone with the amazon app can participate.

After entering Amazon Fresh and scanning at code when they come in, shoppers fill their carts with items, no scanning required. Instead, there are sensors on the shelves that can tell when an item has been taken down. This tech works alongside cameras placed around the store and artificial intelligence-fueled monitors to tally up the bill, which is paid directly from the customer’s app when they leave the store.

Another market segment that has caught contactless fever is fitness trackers. FitBit, which helps users to track their activity, is behind FitBit Pay, which stores credit/debit card information and taps into NFC technology to let consumers pay at contactless registers/tills using a FitBit smartwatch or fitness tracker device. There are several layers of security, such as the separation of card information from merchants or even FitBit thanks to a tokenization platform that the company uses. FitBit pay supports countless banks and jurisdictions.

In 2019, contactless payments represented 41% of total card transactions. After COVID-related lockdowns were eased, retailers saw a 16% jump in the overall value of contactless transactions in the month of October vs. year-ago levels

One of the trends that have caught fire in the wake of the pandemic is an increase in the spending limit attached to contactless cards. The U.K. has been front-and-center in this movement after the government confirmed it would more than double the limit on contactless card payments from GBP 45 to GBP 100 this year.

Things can go wrong, however, even with the most widely used brands. For example, a consumer said she was using Apple Pay at a U.K. grocery store to pay for bananas. She was in a rush, and the contactless nature of Apple Pay seemed like a good idea at the time. As it turned out, however, her account was seemingly charged more than USD 2,200 for the bananas that would normally cost GBP 4. She eventually got a refund, but it cost her time and effort.

The pandemic has only strengthened the contactless momentum.  More than one-quarter of survey respondents from Lithuania are using cash less frequently, while more than 33% are using contactless cards more often. The decline in cash payments is directly correlated to the availability of more convenient payment options, including the rising limits on contactless transactions and the increased prevalence of contactless systems at stores.

As for Latvia, the Finance Latvia Association lifted the contactless transaction limit from EUR 25 to EUR 50 last year. The change was made in an attempt to stifle the spread of the pandemic via keypad terminals. Major payments companies in the country supported the increase, as a result of which contactless transactions in Latvia are expected to increase by 10 percentage points or more.

Alternative payment methods were gaining momentum in Latvia even before the pandemic hit with the rise of solutions like Apple Pay. Google Pay expanded into Latvia, Estonia and Lithuania in November 2020. As of 2019, Latvia saw 1.3 million transactions from contactless cards across close to 30,000 contactless point-of-sale systems. The average value of a payment transaction in Latvia across cash and non-cash methods hovers at EUR 17.44 compared to EUR 53.77 in Luxembourg.

In Estonia, where the limit on contactless payments is also EUR 50, less than 50% of transactions are completed with cash, according to a 2020 ECB report that polled Europeans last summer. This compares to 68% in both Latvia and Lithuania. Estonians used contactless payments 35% of the time, falling below countries like Slovakia, Greece Slovenia at 77%, 73% and 71%, respectively. Close to half, or 46% of Estonians, have their savings in cash.

In Estonia, Latvia and Malta, less than one-quarter of participants in the ECB survey said they are turning to cash less frequently since the pandemic.

A major catalyst for the rise of contactless transactions in Europe has been convenience, thanks to changes such as higher limits for daily purchases and higher limits for having to enter PIN numbers at the point-of-sale. In addition, retailers have not been shy to request that consumers pay via contactless methods at the till for everyone’s safety.

According to the aforementioned ECB study, 40% of survey participants in the euro area have turned to cash less frequently since the beginning of the pandemic, 90% of whom expect to see this trend continue even once the dust from COVID has settled. Another 40% said their use of contactless payments has increased since the onset of the pandemic. While the average limit for contactless payments in the euro area is EUR 50, there are notable differences among the countries, which could be attributed to the pace at which they are introducing the contactless infrastructure at retailers.