The days of retiring from a decades-long career at the same large company, while honorable, are mostly history. Millennials and Gen Xers hop jobs more than any other generation before them, and the gig economy aka freelance economy or the flexible economy is disrupting economic cycles in ways that could not have been forecasted.

The internet and mobile apps have given rise to the gig economy, where full-time workers are increasingly opting for the flexibility that’s inherent with part-time work. Instead of having one employer, some gig workers may have shifted with multiple employers in a single day.

Gig workers are willing to forego the security and risk-averse nature of a single employer as well as a steady check for the freedom and opportunity that contract work from multiple channels has to offer.

Between 20% and 30% of the working population across Europe and the United States, or 162 million people, participate in the gig economy in some way every year, as per a McKinsey report. Yet, as freelance platforms such as Uber and Deliveroo have expanded, questions surrounding key issues of gig workers remain, including both the classification and rights of gig-economy workers.

This issue has particularly taken center stage in the UK, where an independent courier recently died for choosing to skip a medical appointment for a chronic illness rather than face a GBP 150 fine for missing work. 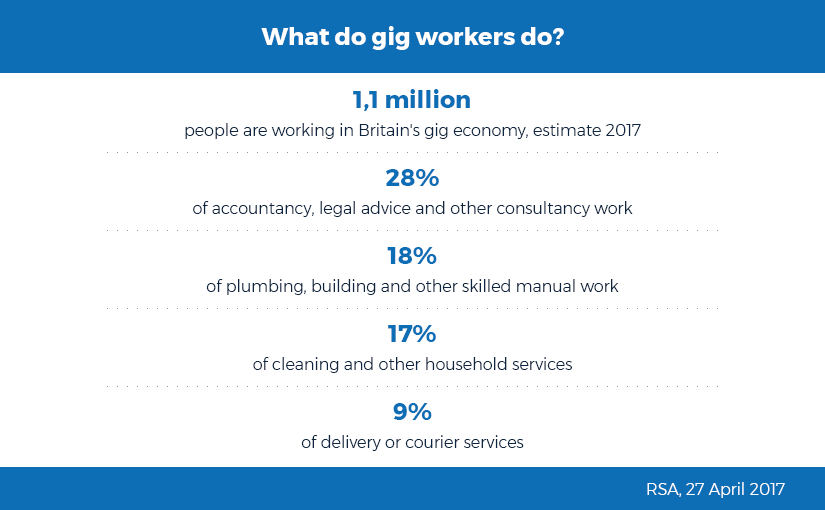 Worker vs. Self Employed

The UK government is now taking a series of steps to make the gig economy worker more secure. They are implementing a set of recommendations that were inspired by Matthew Taylor, the adviser to UK Prime Minister Theresa May and CEO of Royal Society of Arts. He developed seven principles pertaining to “worker rights and responsibilities” as well as “employer freedoms and obligations.”

Earlier this month PM May responded to Taylor’s report, unveiling a legal framework on employment rights for workers in the region. The purpose of the policies is to create “fair and decent” conditions for flexible workers surrounding holiday and sick pay, compensation/invoicing and contracts that are more favorable and offer more security to the worker.

But many gig economy participants were hoping for more, saying instead of tailoring new laws to fit the changing workforce, the policies set forth in the legal framework seem to remind employers of laws that are already in the books. In short, freelancers were hoping for a victory of Uber proportions in which as a result of a legal victory in the UK these individuals are classified as workers, not self-employed.

Whether someone is classified as a worker (Uber) or self-employed (food-delivery startup Deliveroo) can be the difference between whether or not they are paid for sick and holiday time, not to mention earning a pension.

In the United States, lawmakers gathered earlier this month to explore the gig economy with a focus on retirement savings. Concern stems from the fact that less than one-fifth of gig workers have access to an IRA or any other retirement savings account.

Full-time employees often gain access to an employer-sponsored 401(K) plan, but that benefit doesn’t extend to part-time workers. Most US gig-economy workers forego the retirement plan because they simply don’t make enough to contribute.

A possible solution offered by the Brookings Institution cited in CNBC is for US employers to band together and offer part-time workers what’s known as a multiple employer plan, where companies with features in common – say Uber and Lyft – together sponsor a 401(k) plan for workers. It’s cheaper and spreads the risk among employers.

The gig economy is generation agnostic in terms of the age of workers. In fact, it’s increasingly people who have reached post-retirement age and are still working who are flocking to the type of flexibility that the gig economy provides.

But an economic hurdle that has emerged that could never have been predicted by economists in the decades preceding the shift has been wage growth. Instead of rising, which historically would be the case amid the persistently low unemployment rates in both the United States and the UK of late, wage growth has been threatening to decline.

It’s a function of the gig economy in which employers aren’t beholden to long-term relationships and can engage with workers based on demand. Historically, wage growth was “reset” over the course of several years, economists say. But gig economy employers such as Uber and Amazon have disrupted that model with the ability to decrease demand in a rising wage environment.

In the UK, the new legal parameters should help with more favorable contracts for workers, but time will tell.